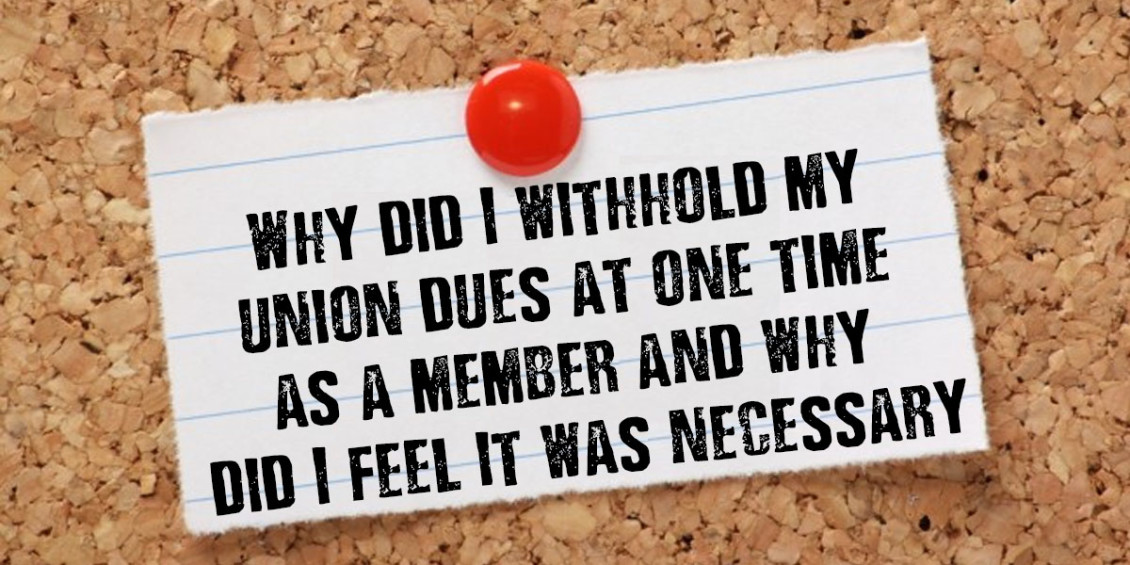 A question was asked “Why did I withhold my union dues at one time as a member and why did I feel it was necessary. Also how do I feel about it as the Union President?” It’s a good and fair question and in the name of transparency, it deserves an answer. It’s long but I hope you’ll read it and understand.

Our decision to withhold our union dues from auto deduction from our paychecks was slightly misinterpreted by the poster. It was actually somewhere in 2004/5 to 2007 and it was a protest. We, like most, were extremely disenfranchised No voters on the forced RPA in 2003. We, combined, lost about $2,200 per month, (Our entire mortgage and with two young children) We chose to withhold our $41 each ($82 p/month) and put it in a High Intrest bearing account. It was our only voice of discontent and there were many, many more that did it. About every 2 or 3 month we’d get the nasty letter we were in arrears and needed to pay. What did we care at the time? Our ability to vote meant nothing as it got changed anyway and Not too differently than with the resent TA. After a few months we would withdraw a lump sum, make a payment and keep the interest. But on every bill we sent back, with or without money, we made it very clear we were ticked at the leadership and were sending in the money they deserved (not much). We did that until we could stomach the forced withdrawal from our paychecks again. But we had a plan. We would always pay to be current to Vote and we would do everything in our power to make a change for the better at APFA. In 2008 my wife and I “both” ran for offices of SFOI Base Chair & Vice-Chair as there was a vacancy. We had a strong and committed following in SFO and no one ran against us for two terms, until they closed the International operation at SFO in Aug. 2011.

Here’s my thought on how I look back on our choice at the time to withhold our money until we felt we were getting the representation we were “mandated” to pay for. To the union at the time, it meant nothing, but to us it did. It empowered us just a little bit, because our union didn’t and it hasn’t for over a decade. One of the Resolutions I voted to send to the membership was a $1 dues increase in 2009. I argued against it with the Budget Committee and other Officers telling them “If the members don’t feel like they’re getting the value they pay for, they will vote NO to an increase of only $1. If they won’t give just $1, the problem is with the Union, NOT the membership.” I was right, the Resolution was voted down as I predicted. Like many Resolutions I objected to, the arguments are in the Boardroom and many times off-record. In the end, when controversial resolutions are drafted by others, it’s best to allow the membership to lead the union from the members up. Your Vote is your Voice and the membership deserves to have their Voices heard.
How, as the President, do I view my stance to withhold union dues? It’s a drastic measure if enough people do it. If I find out members are doing it as a protest, I’m going to get to the bottom of it quickly and get it resolved, and so should any other Officer or Board Member. But my plan is to never get the members so upset and disenfranchised they feel they have to resort to that. The union I plan to organize will be a Members Up administration. One that never gets so out of touch with its members and self-absorbed that it can’t even get a future $1 a month increase if its absolutely necessary, for even the most important reason, what ever that may be. Like maybe Professional Negotiators. Sorry for my long account, but some things need to be crystal clear and transparent. I’m glad you asked.